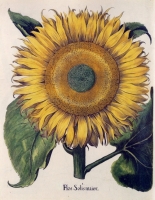 In Greek mythology, Hylas was the son of King Theiodomas of the Dryopians. Other sources such as Ovid state that Hylas' father was Heracles and his mother was the nymph Melite, or that his mother was the wife of Theiodamus, whose adulterous affair with Heracles caused the war between him and her husband. He gained his beauty from his divine mother and his military prowess from his demigod father.

After Heracles killed Theiodamus in battle for his son, Hylas, he took the boy on as arms bearer, and taught him to be a warrior. (WIKIPEDIA)